Weather products in the HEMS Tool include grids of various weather parameters as well as NWS textual weather observations and forecasts. Some gridded products are three-dimensional including temperature, relative humidity, winds, and icing. Other gridded products are two-dimensional and may represent a “composite” of a three-dimensional weather phenomenon or a surface weather variable such as horizontal visibility. A full list and description of each gridded product is given below. The tool also displays relevant NWS textual weather observations and forecasts needed for aviation. These data are either points of observed or forecast weather, often at airports, or regions of hazardous weather represented by two-dimensional polygons. A full list of these products is also found below and very specific configuration options for the display of these data are found in a subsection below.

By default, the HEMS Tool displays the most recent analysis of flight category, a radar loop, colored dots for the flight category at selected airports, SIGMETs and recent PIREPs. For more information on each, see below. At first use, the tool is centered over Chicago IL but the map can be panned in any direction and zoomed in and out by either using the "+/-" buttons in the upper left or the scroll wheel on the mouse.

The default base map is the Esri terrain view. This can be changed through the Options menu.

This is the Esri terrain view which gives the most basic of views from the Esri server. This will show relief for hills and mountain at higher zoom levels.

This is the Esri road view which gives the more detailed view of roads from the Esri server. This will show detailed city streets at higher zoom levels.

This is the Esri satellite view which gives a photographic view s from the Esri server. This will not show roads so using the highway and road overlay would be useful with this basemap.

This is a simple light background based on the NASA Blue Marble image. This shows no detail which might be desirable for some more complicated displays. This will not show roads so using the highway and road overlay would be useful with this basemap.

This is the NASA Blue Marble image. This shows no detail which might be desirable for some more complicated displays. This will not show roads so using the highway and road overlay would be useful with this basemap.

This is a blank white background which again might be desirable for some complicated displays and output to a priter.

The HEMS Tool uses a global satellite mosaic constructed from the five geostationary satellites plus appropriate polar orbiter imagery. This resulting image is created every 30 minutes from available imagery.

Note: The European Meteosat imagery is only available every 3 hours so imagery over Europe and central Asia can be up to three hours old.

There are three types of images available:

The images are then sliced up and provided through a progressive tile cache to optimize data transmission and image resolution.

The HEMS Tool uses the MRMS radar mosaic produced by NWS. The radar image combines over 140 radars from around the country into a single image. Additional post-processing is performed to remove some ground clutter and anomalous propagation (AP). The limitations of the radar such as blockage by mountains, lack of radar to radar overlap and overprocessing of clutter and AP can cause the image to not show precipitation where there might be some.

The image used is the RALA product. This only uses the reflectivity from the lowest scan of the nearest radar. This is a 1km image for the contiguous United States. Like the satellite images, the radar mosaic is sliced up and put into the tile cache to provide the maximum resolution and optimal transmission bandwidth. The tile cache is only updated every 10 minutes (MRMS data available every 2).

The display incorporates the latest radar image plus the previous 4 into a loop of radar data showing progression of precipitation echoes. By moving the time slider into the past, the radar loop will always show the latest 5 images ending in the time shown in the slider box.

The gridded analysis product provides near surface ceiling and visibility information every 15 minutes. It's important to note that the analysis is an interpolation between observation points, and therefore may not represent actual conditions occurring. The gridded guidance is using observations and interpolating between those points using background statistics The ceiling and visibility are used together to classify the flight category as VFR, MVFR, IFR, and LIFR (see table below). This set of rules is commonly used throughout the aviation industry. Ceiling grids are color-coded to show ceilings up to 3000 ft AGL, and visibility displays color-coded grids for visibility up to 5 miles. Values above 3000 ft AGL for ceilings, or 5 miles visibility are transparent. 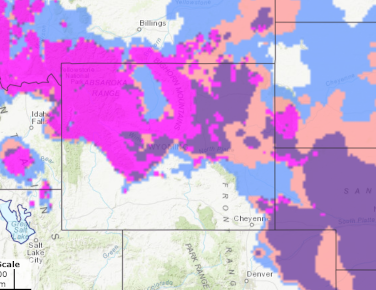 The forecast products are displayed by advancing the time slider forward. The Time slider is located in the upper right corner of the display, just below the current date and time. (see Fig. 2) The time slider advances to the nearest hour and then hourly after that. The product displayed is valid at that hour.

This tool provides hourly forecasts of ceiling, visibility, and flight category (see table below) out to 6 hours. The forecast is utilizing the same model as the Gridded Ceiling and Visibility Analysis.

The icing severity product is a three-dimensional product and provides depictions at specified altitudes above ground level (AGL) at 1000, 2000, 3000, 4000 and 5000 feet. In regions of steep terrain, these altitudes may have significant deviations from actual height above terrain given the limiting factor of grid cell size, which is approximately 13 km and the resolution of the topography in the model. The icing severity product combines a multitude of weather observations (temperature, humidity, satellite, observed surface weather and pilot reports, radar data, etc.) to diagnose areas of expected trace, light, moderate, and heavy icing. Separate overall icing probability (from 5 to 85%) and severity are provided as well.

These products originate from the Current Icing Product (CIP) and Forecast Icing Product (FIP) developed by the FAA and NCAR. These products start with data from the RAP which is run hourly. FIP has forecasts at 1, 2, 3, 6, 9, 12, 15 and 18 hours. The time slider will use CIP for current and past times and time adjusted FIP for future times.

Temperature, relative humidity and wind speed are presented on 1000' AGL increments to 5000'. These grids are available every hour and forecasts run to 6 hours into the future.

Data overlays offer not only a display of data but each feature can be clicked on to get more information. This can include the raw METAR, the text for a SIGMET or location information for a Nav Aid. It should be noted that each feature on the display could overlap another feature making it unselectable. To select that underlying feature, a layer or two might have to be turned off. This is especially true of the wind barb display.

The METAR observations are plotted using the standard station model where temperature, dewpoint, winds, altimeter setting, weather, ceiling and visibility are displayed around the station location.

The data plotted comes from the latest available observation, including SPECIs. The stations displayed follow a progressive priority scheme that will show more stations depending on how far the user zooms in. This density can be changed through the Options menu.

If the time slider is moved into the past, the nearest observation before the listed time is displayed. If the slider is moved into the future, the TAF for that station is shown. It should be noted there are fewer TAF stations than available METAR sites. More configuration options are available including parameters displayed, scale factor of graphic, and whether the TAF is included in the popup display.

Note: Variable winds will appear with a circle around the station and a wind barb pointing north with wind speed and gust.

This displays only the flight conditions at a particular airport as a colored dot. The flight category display uses the same priority filter system as the METAR plots but the density is much higher.

This displays turbulence and icing PIREPs. The default is to show only PIREPs reported in the last 90 minutes and only those below 12,500 feet. These options can be changed in the Options menu.

This displays the current valid SIGMETs. This will show both domestic and international SIGMETs. Individual SIGMET types can be toggled on and off through the Options menu. SIGMETs can be distinguished by their red outline and red labels.

This displays the current valid G-AIRMETs. This will show all G-AIRMET types which will be a bit cluttered. Each type can be toggled on and off through the Options menu.

This displays the Center Weather Advisories (CWA) issued by the CWSUs at each ARTCC. CWAs can be distinguished by the black outline and black labels.

This displays all current warnings, watches and advisories. The Options menu will allow the user to select "Warnings" only which will only show tornado, severe thunderstorm, blizzard, winter storm and ice storm warnings.

This displays wind barbs from the RAP model based on the height selected through one of the weather displays (CVA, Icing and RAP temperature, RH and wind speed). If the user selects temperature at 2000' AGL, the winds at 2000' AGL would also display. The wind barbs are filtered based on zoom level. As the display is zoomed in, more wind barbs will display.

This displays interstates in the US and major highways in other countries. Even though the Esri basemap has highways terrain and road views, it can be difficult to see them with data overlaid. This adds an additional overlay.

This displays US, state highways and major city roads depending on the zoom level.

This displays US county outlines.

This displays basic navigation aids such as VORs, and DMEs. These will only display at a sufficient zoom level. When this layer is turned on, a display of direction and distance to the nearest aid will display in the lower right.

This displays icons for the locations of airports and heliports across the US. This will only be visible at a sufficient zoom level.

This displays runway configurations for major airports and most intermediate sized airports. The runways will display as orange lines. This will only display at specific zoom levels.